Scott Anderson, Ph.D., P.Geo., Vice-President Exploration, stated, “Recent advances at the Wallace and Bidou projects, featured below, illustrate the effectiveness of our regional-scale exploration program in generating quality targets, with clear potential for significant discovery, in favourable geological settings. We look forward to testing both new and advanced targets during the next phase of exploration drilling, anticipated to commence in Q4 2021.”

Exploration during the 2021 program at Wallace (Figure 1) has focussed mainly on the highly prospective northwest portion of the project area. Surface rock sampling has returned numerous high-grade gold values from large-scale faults and shears that cut an intensely deformed and regionally-folded package of sedimentary rocks, komatiite and basalt flows, and iron formation, all of which are cut by gabbro, tonalite and quartz-feldspar porphyry intrusions. These rocks are equivalent in age to the prolific Balmer assemblage in the adjacent Red Lake greenstone belt, which contains the vast majority of the belt’s gold endowment. 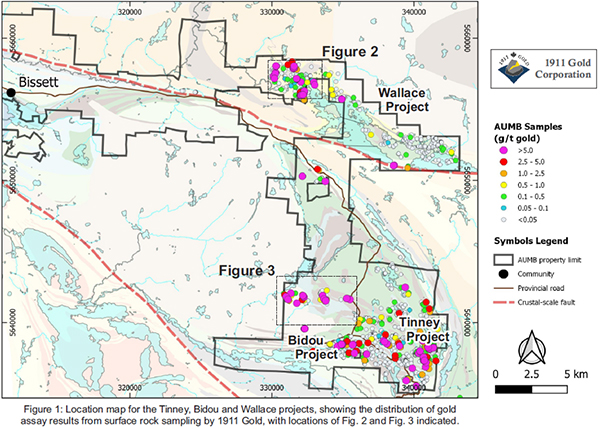 The most prospective structures identified to date at Wallace are in the core of a regional-scale fold – a highly favourable setting for localizing gold-bearing fluids – and have only been tested by local shallow historical drilling; many have no record of previous drilling. Priority targets include the Hi-grade, Alec, Willi and Smoky vein systems (Figure 2; Table 1), each of which has returned multiple high-grade assays from surface sampling; outcrop stripping and detailed mapping and sampling are ongoing. 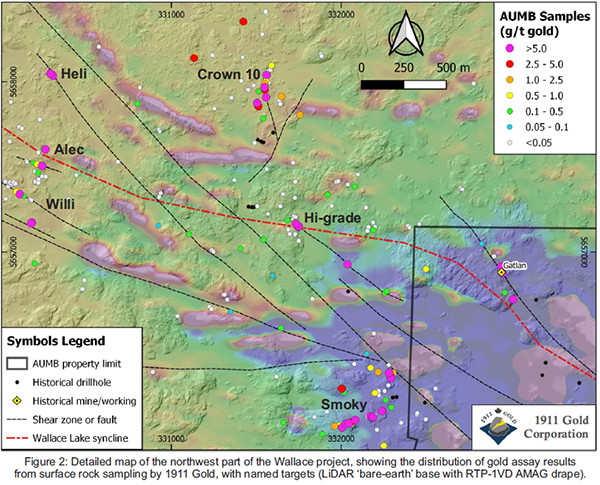 Fieldwork in 2021 focused on expanding mapping and surficial geochemistry to better understand the scale of the mineral system identified at Bidou (Figure 1). Prospecting and detailed sampling in the northern part of the project, adjacent to the margin of the belt-scale Ross River pluton, returned numerous high-grade gold values from quartz-sulphide veins at the Eldorado, Eldorado East and Walton prospects, two of which are associated with shallow historical workings (Figure 3; Table 1). 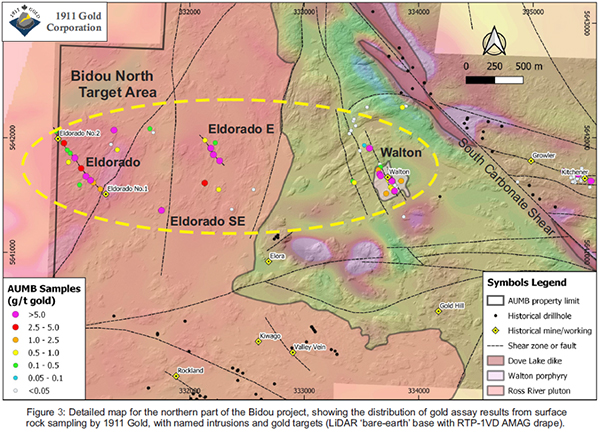 Quartz-sulphide veins are hosted by a series of parallel shear zones that have been traced on surface for up to 650 metres along strike; exposure is typically lost under overburden to both the northwest and southeast along these structures. The shears are spatially associated with the marginal phase of the pluton, as well as a distinctive porphyry plug hosted by basalt flows and sedimentary rocks adjacent to the pluton contact. Together with the historical Central Manitoba mine, these high-grade showings define a corridor more than 5 kilometres in length through the northern part of the Bidou project area, the western parts of which have seen minimal previous work. Results of detailed mapping and sampling, together with recently completed surficial geochemistry will be used to define drill targets in this highly-prospective corridor.

The Company continues to process the large amount of new high-quality exploration data collected during the 2021 field exploration program, which prioritized the systematic acquisition of surficial geochemical data, with emphasis on areas of minimal bedrock exposure, as typically coincide with favourable strongly-altered structures in the Rice Lake belt. The results of the field program will be integrated with proprietary and historical datasets to identify and prioritize targets for the next phase of exploration drilling, planned to include at least 10,000 metres, allocated roughly equally towards defined prospective structures with clear potential to host significant gold ounces based on previous 1911 Gold drilling, as well as several new targets generated from the field exploration program.

Sample handling, preparation and analysis are monitored through the implementation of formal chain-of-custody procedures and quality assurance-quality control (QA-QC) programs designed to follow industry best practices. Grab samples from surface exploration are assayed at the True North laboratory using industry-standard Pb-collection fire assay on 30 g aliquots with a gravimetric finish. Channel samples and coarse rejects from select grab samples are submitted to Activation Laboratories Ltd. (Actlabs) in Ancastor, Ontario, for preparation by crushing to 80% passing 2 millimetres, riffle splitting to obtain 250-gram aliquots, and pulverizing to 95% passing 106 microns; the pulverizer bowl is cleaned with sand after each sample. Pulps are analyzed by a 30-gram fire assay and AAS finish. Assays above 5 g/t Au are re-assayed with a gravimetric finish using a cut of the original pulp. Samples with visible gold are analyzed by metallic screen assay, with the weighted average of gold for the entire sample reported, based on fire assays of the screen oversize and undersize fractions. In addition to Actlabs’ in-house QA-QC protocols, 1911 Gold inserts certified standards, non-certified blanks and field duplicates into the sample stream at regular intervals, such that QA-QC accounts for 10% of the total samples submitted. Blanks are also inserted after heavily mineralized or visible-gold–bearing samples. Results are routinely evaluated for accuracy, precision and contamination.

1911 Gold is a junior explorer that holds a highly prospective, consolidated land package totalling more than 58,000 hectares within and adjacent to the Archean Rice Lake greenstone belt in Manitoba, and also owns the True North mine and mill complex at Bissett, Manitoba, where it is reprocessing historic tailings on a seasonal basis. 1911 Gold believes its land package is a prime exploration opportunity, with potential to develop a mining district centred on the True North complex. The Company also owns the Apex project near Snow Lake, Manitoba and the Tully and Denton-Keefer projects near Timmins, Ontario, and intends to focus on both organic growth opportunities and accretive acquisition opportunities in North America.