The Apex exploration property is located 15 kilometres southeast of the town of Snow Lake (570 kilometres north of Winnipeg) in north-central Manitoba and consists of 5 mining claims, totaling 752 hectares, that are 100% owned by the Company.

The Apex property is situated in the Proterozoic Flin Flon greenstone belt, one of the most prolific mining districts in the world, with world-class gold-rich volcanogenic massive sulphide (VMS) and orogenic gold deposits. The property has been explored intermittently dating back to the discovery of the Apex and KK showings in 1917–1918. It is situated in a favourable structural setting, within a fault-block bound on both sides by crustal-scale faults, and lies immediately north of the Laguna property being explored by an affiliate of Kinross Gold Corp. The New Britannia mine, located at Snow Lake, produced more than 1.4 million ounces of gold and includes a gold processing facility owned by Hudbay Minerals Inc.

Situated on the northeast shore of Wekusko Lake, the Apex property can be easily accessed by boat from a landing on provincial road 392, located 9 kilometres to the west.

The Apex property is located within the eastern portion of the Flin Flon greenstone belt of the Proterozoic Trans-Hudson orogen of the Canadian Shield. Hosting world-class gold, base-metal and gold-rich base-metal deposits, the Flin Flon belt is among the largest, best-preserved and well-studied greenstone belts in the world. It consists of folded and faulted volcanic and sedimentary rocks, and intervening dome-like granitoid intrusions, that record the opening and closure of an ancient ocean. Volcanic assemblages record 1.92–1.88 Ga oceanic volcanism in various settings and were subsequently juxtaposed during 1.88–1.87 Ga tectonic accretion. These rocks were unconformably overlain by 1.86–1.84 Ga marine turbidites and 1.85–1.83 Ga fluvial-alluvial sedimentary rocks prior to regional deformation and metamorphism (1.82–1.79 Ga) associated with final closure of the ocean basin. 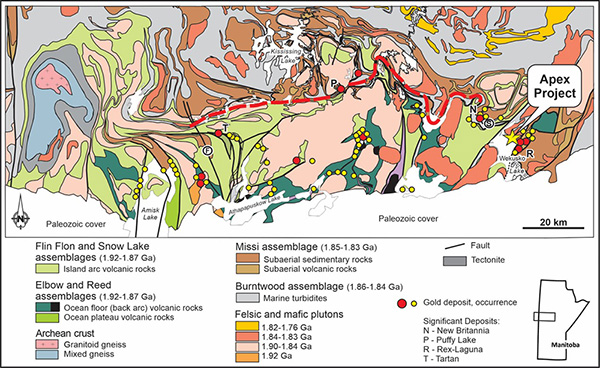 The Flin Flon belt is characterized by a protracted structural history involving: syn-volcanic faulting and extension; early folding and faulting relating to oceanic accretion; fold-and-thrust-style deformation; and later strike-slip deformation along long-lived, crustal-scale faults. As with Archean greenstone belts, this protracted evolution resulted in a structural architecture that is highly prospective for orogenic gold deposits.

Within the Flin Flon belt, major orogenic gold deposits are spatially associated with the structural zone along which oceanic volcanic rocks of the 1.92–1.88 Ga Flin Flon and Snow Lake assemblages are interleaved with sedimentary rocks of the Burntwood (1.86–1.84 Ga) and Missi (1.85–1.83 Ga) assemblages. From east to west, these deposits include the past-producing Rex-Laguna, New Britannia, Puffy Lake and Tartan deposits, with cumulative production of more than 1.5 million ounces of gold. Gold deposits and occurrences elsewhere in the Flin Flon belt occur along crustal-scale faults within narrow bands of volcanic rocks.

The Apex gold property is located between the New Britannia and Rex-Laguna deposits, within a large-scale fault-block bound by the Berry Creek and Crowduck Bay faults to the northwest and southeast, respectively, both of which can be traced along strike for more than 50 kilometres. The property is underlain by sedimentary rocks of the 1.86–1.84 Ga Burntwood assemblage, intruded by the 1.84–1.83 Ga Rex Lake pluton, comprised of tonalite, granodiorite, granite and quartz gabbro.

The Apex property contains two significant gold occurrences within or adjacent to the outer margin of the Rex Lake pluton. Two distinct styles of mineralization are apparent.

The Apex gold deposit consists of a flat-lying, sheet-like body of fractured, quartz-veined and altered granodiorite that contains disseminated arsenopyrite, pyrite, chalcopyrite and pyrrhotite. Sulphide content rarely exceeds 5 volume per cent. Gold mineralization is associated with arsenopyrite and minor scheelite; assays from surface grab samples range up to 22 g/t Au and 2.5% As. The deposit was delineated in several drilling campaigns between 1934 and 1981. Various resource estimates were reported, generally indicating a near-surface, sheet-like mineralized body containing 100,000–200,000 tonnes of material grading approximately 3–4 g/t gold (note: these estimates pre-date NI 43-101; the Company considers these resource estimates to be historical and is not treating these historical estimates as current resource; they are included here solely for historical context).

The KK showing consists of a steep quartz-tourmaline shear vein hosted by sedimentary rocks outside the margin of the Rex Lake pluton. This vein has a mapped strike length of approximately 190 metres and average thickness of 0.6 metres. Alteration consists of sericite and silica, with up to 5% disseminated pyrite and arsenopyrite. Previous workers have reported values up to 59.3 g/t Au from grab samples of the vein material.

Over 100 drillholes have been completed on the property in various drilling campaigns, mainly consisting of short (30–50m), close-spaced drillholes on the Apex deposit. There remains considerable potential for vertically-stacked zones of gold mineralization on the property.

In 2019, the Company completed a program of geological mapping, prospecting and surficial geochemical surveys (humus and black spruce bark), focused on historical showings on the Apex Property. Reconnaissance grab samples yielded a number of high-grade gold assays, including 14.1 g/t Au from a quartz vein at the Apex showing and 69.1 g/t Au from the KK vein, as well as 132.6 g/t Au from a grab sample of a mafic inclusion in granodiorite from the Apex #2 showing, located between the Apex deposit and KK vein.

These results demonstrate considerable potential for high-grade gold mineralization on the property. The Laguna property on the opposite (south) side of the Crowduck Bay Fault includes the historic Rex-Laguna gold mine, which produced 60,000 ounces of gold (1918–1940) at an average grade of 16.8 g/t Au, making it the highest-grade gold mine in Manitoba.