As one of 1911 Gold’s flagship assets, the True North Complex is a key component of our overall corporate strategy to develop a district-scale gold exploration and mining operation around a centralized ore processing facility in the Rice Lake greenstone belt. 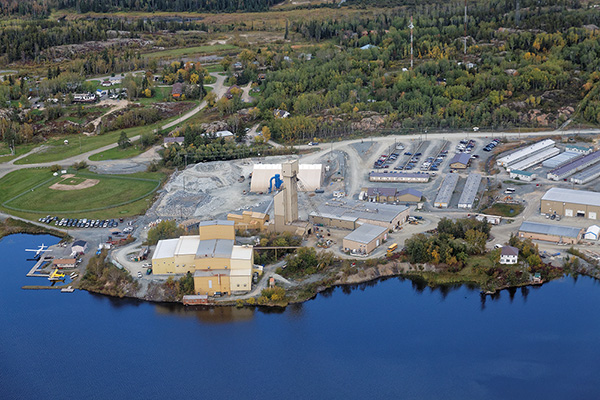 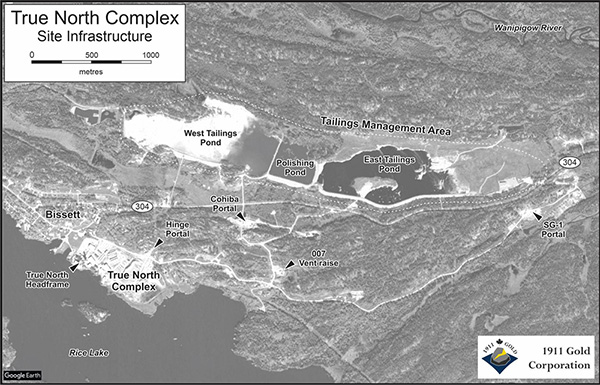 The True North Complex is located adjacent to the town of Bissett on the north shore of Rice Lake, approximately 150 kilometres northeast of the city of Winnipeg, Manitoba. It is situated on mineral dispositions held 100% by the Company, comprising two contiguous Mineral Leases (ML63 and ML13433), totaling 1,092 hectares.

Of historical note, the True North mine has produced more than 2 million ounces of gold over a mine life that has spanned close to 100 years, including 36 years of continuous production (1932–1968) from the historical San Antonio Gold Mine. 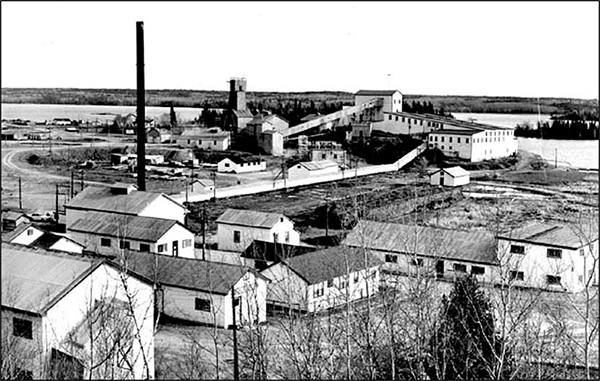 The True North Complex includes a modern, fully-permitted 1,300 tonnes-per-day ore processing facility, comprised of crushing, milling, centrifugal gravity concentration and flotation circuits. Concentrates from the gravity circuit are upgraded on a shaker table for direct-smelting, whereas flotation concentrates are reground, thickened and then leached in a three-stage leach circuit. Dissolved gold is recovered by six-stage carbon-in-pulp (CIP) circuit, followed by conventional pressure strip, electrowinning and smelting in an electric induction furnace. Gold is poured into doré bars and shipped to a refinery prior to being sold.

Current process plant recovery is name-plated at 93.5% based on a feed grade of 5.5 g/t Au, but is strongly grade-dependent, averaging 80% at the current feed grade (0.9 g/t Au) from the tailings reprocessing operation, but historically ranging up to 96–97% with higher feed grades from mined ore.

For the 2020 operating season, the Company is forecasting production of 200,000–220,000 tonnes at an average grade of 0.9 g/t Au from the tailings reprocessing operation.

During the past three years, this seasonal (April to November) operation has produced nearly 15,000 ounces of gold, as follows:

This cost-effective operation utilizes an excavator to windrow tailings within the Tailings Management Area (TMA) for dewatering and to load the material onto 36-tonne trucks for transport to the processing facility. Tailings are off-loaded into a screened feed hopper and conveyed directly to the grinding circuit, bypassing the crushing circuit. Tailings are processed at a rate of 50 tonnes per hour with a target rate of 1,200 tonnes per day.

The TMA is located 1.6 kilometres northeast of the processing facility in an area naturally defined by bedrock ridges around the perimeter of a previously boggy area. It includes west and east impoundments, totaling 110 hectares in area, separated by polishing pond 11 hectares in area. The current dikes and embankments were constructed in stages to industry standards, beginning in 1996, with the most recent expansion completed in 2014.

An updated Mineral Resource Estimate for the True North tailing reprocessing operation was produced in March 2018. Assay results from 138 auger and percussion drillholes spaced approximately 60 metres by 30 metres were used to model the tailings mineral resource. Details on the methodology of the Mineral Resource Estimate can be found in the Technical Report dated March 31, 2018.

Underground infrastructure at the True North Complex includes the ‘main’ (True North) mine, accessed via a 1,219 metre two-compartment shaft (A-shaft), originally brought into service in 1934 and subsequently deepened to its present depth in 1997. An internal winze (D-shaft) and ramp system extend the workings in the main mine to 1,675 metres vertical depth and are connected to A-shaft via a 1,400-metre-long tramway on the 26th (1,190 metre) level. A-shaft is equipped with a modern headframe, dual-drum hoist and 4.5 tonne skip. Several ramp-access mines, including SG-1, Hinge and Cohiba, were developed between 2005 and 2010 on satellite deposits located northeast and east of the main mine.

Underground development at True North began over 100 years ago, when prospect shafts were sunk during the 1920’s and 30’s on several gold showings, with only the San Antonio (True North) mine eventually being brought into production. Elsewhere in the district, significant mine development and production took place between 1927 and 1951 at Central Manitoba, Gunnar and Ogama-Rockland, which have since been closed and partially reclaimed. Historically, shrinkage stoping was the principal mining method utilized in the district, although long-hole stoping and mechanized cut-and-fill were employed more recently at True North.

The most important host for gold mineralization is a layered gabbro sill known as the San Antonio Mine unit (host to the main True North or Rice Lake deposit), but significant mineralization is also hosted by overlying basalt flows (007, 710-711 and SG1 deposits) and dacitic volcaniclastic rocks (Hinge and Cohiba deposits). Orebodies within these deposits were accessed via the True North shaft and underground tramway, or from surface declines, the latter including the Hinge, 007 and SG1 declines.

An updated Mineral Resource Estimate for True North was produced in 2018, based on data from 7,678 surface and underground diamond drillholes (371,487 assay samples), and 30,202 channel sample strings from underground workings (114,756 assay samples). Wireframe models were constructed for 73 vein sets. Details on the methodology of the Mineral Resource Estimate can be found in the Technical Report dated March 31, 2018.

The original gold discovery in the Rice Lake district was made in 1911 by Duncan Twohearts, an indigenous trapper from the Sagkeeng First Nation, who identified an outcropping of vein quartz on the north shore of Rice Lake – the discovery outcrop for the True North Gold Deposit. Twohearts wrapped his find in a piece of blue denim, marking the first significant discovery of gold in the Province of Manitoba.

The original mining claim, named San Antonio, was staked on May 17, 1911, followed in August 1912 by the establishment of a small stamp mill on the adjacent Gabrielle mining claim – the first gold mill erected in Manitoba. Subsequent mine developments in the Rice Lake district took place in two main stages (1923–1968 and 1998–2017), with 23 mines eventually recording production, amounting to approximately 2.3 million ounces of gold.