For Q1 2022, the Company has now laid-out 12,000 metres of exploration drilling, to follow up on priority high-grade intercepts from its Phase I and Phase II drilling programs at the Tinney and Bidou projects, and to test several new targets generated by the Company’s exploration programs at both the Rice Lake and Apex properties. The company anticipates this initial phase of drilling will be completed by late April 2022.

“Drilling at Tinney and Bidou has clearly identified potential for gold systems of similar scale to the True North deposit at Bissett, which attracted the interest of our significant new strategic investor. We are very excited to continue testing these systems, using our advanced 3D geological models to evaluate their potential”, stated Scott Anderson, Vice President, Exploration. “In addition, our systematic exploration program continues to generate compelling new targets at both the Rice Lake and Apex properties, most of which have no record of previous drilling, and we look forward to seeing the first drillcore and assay results from several of these kilometre-scale structural and geophysical targets in the coming months”.

The Rice Lake Gold Property is located on the Archean Rice Lake greenstone belt, which is the western extension of the prolific Red Lake belt in adjacent Ontario, and is situated along the same fundamental crustal-scale structure—an ancient plate-margin—that produced the exceptional gold endowment of this district. The Company’s consolidated land position, totaling over 58,000 hectares after recent strategic acquisitions, covers a 70-kilometre-long section of a crustal-scale ‘break’, referred to as the Wanipigow fault, that represents a principal control on orogenic gold in the Rice Lake–Red Lake district.

Following up on high-grade intercepts from its previous exploration drilling programs, the Company is drilling several targets in the Tinney and Bidou project areas, focusing on significant structures that have demonstrated potential to host high-grade gold.

Initial drilling at Tinney will include approximately 2,200 metres to follow-up on previous results at the Edna-Otter and Cougar targets, and approximately 1,300 metres to test several new targets proximal to the Gunnar porphyry intrusion (Figure 1). Likewise, at Bidou, initial drilling is planned to include 2,100 metres of follow-up drilling at the Bidou South and Bidou Shear targets (Figure 2), as well as 1,400 metres to test two new targets in the northern part of the project area, both of which are associated with historical workings, with no record of previous drilling. 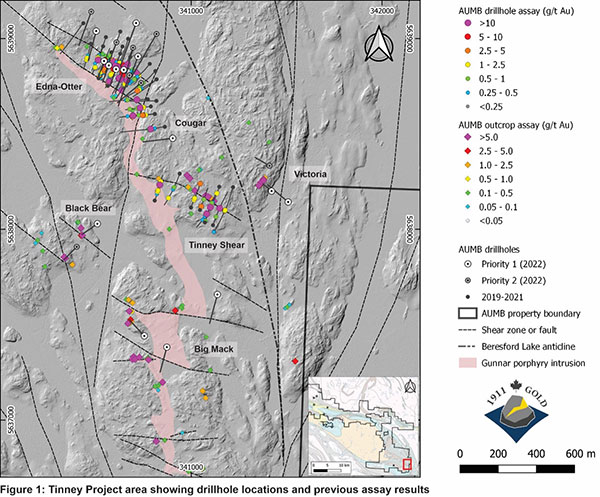 At the Wallace Project, the Company plans to complete approximately 2,500 metres of helicopter-supported, first-pass drilling to test five different structures that are favourably situated in the hinge of a regional-scale fold and returned high-grade gold values from the Company’s sampling programs.

In addition, an induced-polarization (IP) survey (Abitibi Geophysics’ OreVision® system) has been completed over a 24 line-kilometre grid at the Currie’s Landing Project, in the far western portion of the Rice Lake Property. The grid was centred on a large-scale, untested, structural target defined by high-resolution magnetic survey data. The Company anticipates generating a number of compelling drill targets at Currie’s Landing based detailed 3D inversion and interpretation of the magnetic and IP datasets, with a maiden drill program anticipated for H2 2022. 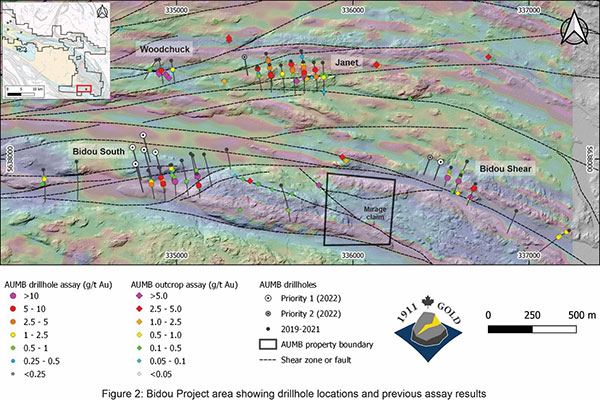 The Apex Gold Property, totalling 2,200 hectares, is located in the Paleoproterozoic Flin Flon – Snow Lake greenstone belt, which is one of the most prolific belts of that age worldwide, hosting numerous world-class base metal deposits as well as the 1.5-million-ounce New Britannia gold deposit, located 14 kilometres to the northwest at Snow Lake. Significant gold deposits and occurrences in the district are spatially associated with the northern margin of the belt; the Company’s Apex Property is situated between two crustal-scale faults cutting this margin, representing a highly favourable structural setting, which is also currently being explored for gold by an affiliate of Kinross Gold Corporation, on the opposite (south) side of the crustal-scale Crowduck Bay fault.

On the basis of new geological mapping, surface sampling and a deep-penetrating IP survey (Abitibi Geophysics’ OreVision® system), the Company has identified six priority drill targets at Apex (Figure 3); approximately 2,500 metres of drilling is planned to test these targets in the coming weeks.

With drilling programs now ongoing in three projects areas, and a fourth program to be added in early March, the Company anticipates strong news flow in H1 2022, leading into the 2022 field exploration program, which is being designed to further advance several projects within the district-scale Rice Lake Property, as well as the Apex Property.

The Company is continuing to manage off-site issues related to weather and COVID-19 which have already caused delays in sample shipments from the first six drillholes to the assay lab in Ontario. The Company has also received reports of increased lab turnaround times due to staff depletions. The Company is evaluating options to work around the shipping delays and every effort will be made to obtain and report assay results as rapidly as possible. 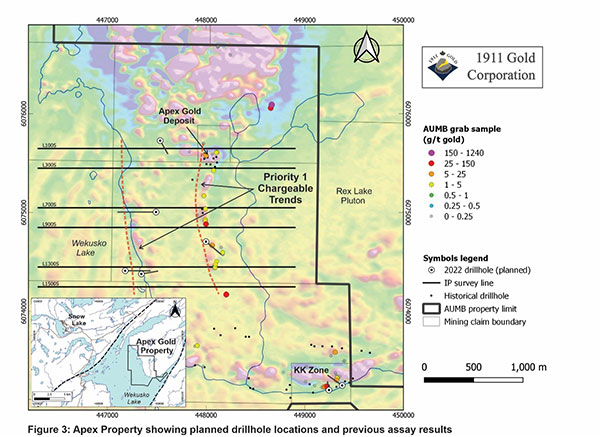 1911 Gold is a junior explorer that holds a highly prospective, consolidated land package totalling more than 58,000 hectares within and adjacent to the Archean Rice Lake greenstone belt in Manitoba, and also owns the True North mine and mill complex at Bissett, Manitoba, where it reprocesses historic tailings on a seasonal basis. 1911 Gold believes its land package is a prime exploration opportunity, with potential to develop a mining district centred on the True North complex. The Company also owns the Apex project near Snow Lake, Manitoba and the Tully and Denton-Keefer projects near Timmins, Ontario, and intends to focus on both organic growth opportunities and accretive acquisition opportunities in North America.

The Company acknowledges the support received by the Government of Manitoba via a $300,000 grant from the Manitoba Mineral Development Fund (MMDF), which provided partial funding for the 2021 field exploration program and was instrumental in advancing several new exploration targets to drill-stage (see Press Release dated September 1, 2021).