1911 Gold Intersects 5.99 g/t Gold over 3.3 Metres at the Bidou South Target and Provides Update on the Phase Il Drilling Program

TORONTO, Ontario, January 18, 2021 – 1911 Gold Corporation ("1911 Gold" or the "Company") (TSX-V: AUMB) (OTCQX: AUMBF) is pleased to provide an update on the ongoing 18,000-metre drilling program on the 100% owned Rice Lake properties in Manitoba. The Phase II drilling program is primarily focused on testing high-grade targets in the Bidou and Tinney project areas that were identified in first pass drilling during the 2019-2020 Phase I program and were further delineated by 2020 field season results. A total of 6,075 metres in 24 drillholes have been drilled, with assays received for the first 1,779 metres from 6 drillholes, reported below.

Dr. Scott Anderson, Vice President, Exploration, commented: “Initial results from the Phase II drilling program at the Bidou project continue to validate our geological models and indicate potential continuity of gold-bearing structures both along strike and to depth at Bidou South, which speaks to the excellent potential for new discoveries in this under-explored area. Our team continue to successfully execute the Phase II program, which is a testament to our exploration crew and our partners at Major Drilling and Activation Laboratories Ltd., working diligently under stringent COVID-19 protocols”.

The Rice Lake properties are located on the Archean Rice Lake greenstone belt, which is the western extension of the prolific Red Lake belt in adjacent Ontario. The Company’s consolidated, district-scale land position, totaling 54,344 hectares, covers a 70-kilometre-long section of a crustal-scale ‘break’—referred to as the Wanipigow Fault—that represents a principal control on orogenic gold in the Rice Lake–Red Lake district.

Included in this release are results from the initial six drillholes, totalling 1,779 metres (Table 1), of the planned 18,000 metre Phase II program, which was initiated with one drill rig on October 31, 2020 and has since been expanded to three drill rigs, towards a planned completion by March 31, 2021. 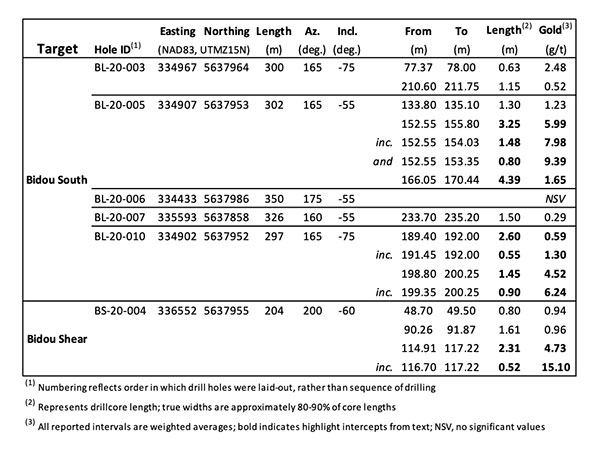 The initial six drillholes of the Phase II program tested two targets within the Bidou project area, including the Bidou South and Bidou Shear targets (Figure 1), both of which returned encouraging results from first-pass drilling in the Phase I program.

Five drillholes were completed at Bidou South (Figure 2), along strike and to depth on a stacked series of structures that cut across a thick layered gabbro sill hosted by sedimentary rocks, analogous to the main ore-hosting unit at the 3-million-ounce True North gold deposit at Bissett. Drillhole BL-20-002, completed during the Phase I program, demonstrated the prospectivity of these structures, returning 2.17 g/t Au over 12.2 metres, including 3.70 g/t Au over 3.1 metres and 10.70 g/t Au over 0.8 metres (see news release dated April 30, 2020 for previous drilling results)

At the Bidou Shear target (Figure 5), located 1.7 kilometres east of Bidou South, quartz-carbonate-tourmaline veins are developed along a contact between sedimentary rocks and gabbro within the kilometre-scale Bidou Shear. Drillhole BS-20-004 intersected quartz-carbonate-tourmaline veins and strong alteration over a core length of 10 metres, returning 4.73 g/t Au over 2.3 metres (114.91–117.22 metres downhole), including 15.1 g/t Au over 0.5 metres (116.7–117.22 metres downhole). This drillhole was collared 75 metres along strike to the west-northwest of BS-19-001, which intersected 16.2 m of stockwork veins that returned 9.40 g/t Au over 0.7 m within a wider envelope of strongly anomalous gold values (see news release dated January 30, 2020 for previous drilling results). This structure remains untested by drilling for at least 650 metres along strike further to the west-northwest, providing considerable scope for follow-up drilling.

As announced previously, the Phase II drilling program will be comprised of approximately 60 drillholes, totalling 18,000 metres of drilling, primarily following up on the successful Phase I program at the Tinney and Bidou projects. The program will also include first-pass drilling, totalling approximately 7,000 metres, of new targets that have been advanced to the drill stage at the Bidou, Tinney, Horseshoe, Poundmaker and Wanipigow East projects.

Going forward, one drill rig will continue testing new targets located northwest of the True North complex in the Poundmaker and Horseshoe project areas, whereas two drill rigs will focus on high-priority follow-up drilling of targets on the Tinney project, including the Edna-Otter, Tinney Shear and Cougar targets (Figure 1). In the final stages of the program, high priority targets in the Tinney, Bidou and Horseshoe project areas will be tested by lake-based drilling, once sufficient ice thickness has been built to accommodate drilling equipment.

Ron Clayton, President and CEO commented “We are in the early stages of our 18,000 metre, 60-hole Phase II drilling program.  The early results continue to encourage us that we are on the right track with our exploration program and we firmly believe that this district has the geologic potential to host multiple large-scale gold deposits.”

Sample handling, preparation and analysis are monitored through the implementation of formal chain-of-custody procedures and quality assurance-quality control (QA-QC) programs designed to follow industry best practices. Drillcore is logged and sampled in a secure facility located in Bissett, Manitoba. Drillcore samples for gold assay are cut in half using a diamond saw and are submitted to Activation Laboratories Ltd. (Actlabs) in Ancastor, Ontario, for preparation by crushing to 80% passing 2.0 millimetres, riffle splitting to obtain 250-gram aliquots, and pulverizing to 95% passing 106 microns; the pulverizer bowl is cleaned with sand after each sample. Pulps are analyzed by a 30-gram fire assay and AAS finish. For assays above 5 g/t Au, a cut of the original pulp was re-assayed with a gravimetric finish. Samples with visible gold are analyzed by metallic screen assay, with the weighted average of gold for the entire sample reported, based on fire assays of the screen oversize and undersize fractions. In addition to Actlabs’ in-house QA-QC protocols, 1911 Gold inserts certified standards, non-certified blanks and field duplicates into the sample stream at regular intervals, such that QA-QC accounts for 10% of the total samples submitted. Results are routinely evaluated for accuracy, precision and contamination.

Technical information in this news release has been prepared, reviewed and approved by Dr. Scott Anderson, Ph.D., P.Geo., the Company’s Vice President, Exploration, and Qualified Person as defined by Canadian National Instrument 43-101 – Standards of Disclosure for Mineral Projects.

1911 Gold is a junior explorer that holds a highly prospective, consolidated land package totalling 54,344 hectares within and adjacent to the Archean Rice Lake greenstone belt in Manitoba, and also owns the True North mine and mill complex at Bissett, Manitoba, where it is reprocessing historic tailings on a seasonal basis. 1911 Gold believes its land package is a prime exploration opportunity, with potential to develop a mining district centred on the True North complex. The Company also owns the Tully and Denton-Keefer projects near Timmins, Ontario, and intends to focus on both organic growth opportunities and accretive acquisition opportunities in North America.