The Timmins exploration properties are located within a 30 kilometre radius of the city of Timmins, Ontario, in the Timmins-Porcupine Gold Camp of the Abitibi greenstone belt – one of the richest goldfields in the world with over 70 million ounces of past gold production from deposits arranged along the crustal-scale Porcupine-Destor Fault. The Company holds two highly prospective properties in the Timmins-Porcupine Gold Camp, both 100% owned. 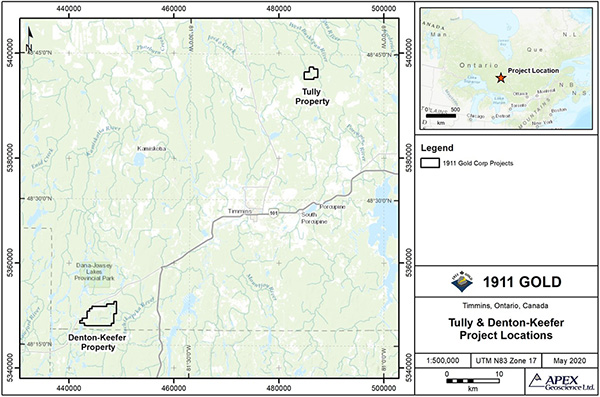 The Tully property, 458 hectares in area, is located 25 kilometres northeast of Timmins and includes the Tully (Timmins North) deposit, which has been the focus of several drilling campaigns since its discovery in 1969. The Tully deposit is interpreted to be located along a major splay of the Porcupine-Destor Fault, referred to as the Pipestone Fault, and is located 2 kilometres southwest of the Bradshaw Gold Project of Gowest Gold Ltd., currently being evaluated for development. The property is accessed by an all-weather gravel road that extends 15 kilometres to the east off of highway 655.

The Denton-Keefer property, located 30 kilometres southwest of Timmins, is immediately adjacent to paved highway 101. The property (2,106 hectares in area) covers a 6.5-kilometre-long section of the Abitibi greenstone belt, including a portion of the Porcupine-Destor Fault. It is thus situated in a highly-prospective setting, geologically similar to those hosting supergiant gold deposits in the Timmins-Porcupine Gold Camp, and is strategically positioned between Pan American Silver’s Timmins West mine and GFG Resources’ Pen Gold exploration project.

The Timmins exploration properties are located within the Abitibi greenstone belt of the Archean Superior Province of the Canadian Shield. The Abitibi belt represents one of the largest and best-preserved greenstone belts in the world and is also one of the most prolific, hosting numerous world-class gold, base metal and gold-rich base metal deposits. It consists of generally east-trending, folded and faulted successions of volcanic and sedimentary rock, and intervening dome-like granitoid intrusions. Volcanic assemblages that formed by submarine volcanic activity between 2.75 to 2.7 Ga were unconformably overlain by marine turbidites of the Porcupine assemblage (ca. 2.69 Ga) and subsequently affected by at least one phase of deformation involving folding and thrust faulting. Fluvial-alluvial sedimentary rocks of the Timiskaming assemblage (2.68–2.67 Ga) were later deposited in fault-controlled basins during regional extension, accompanied by alkaline volcanism. 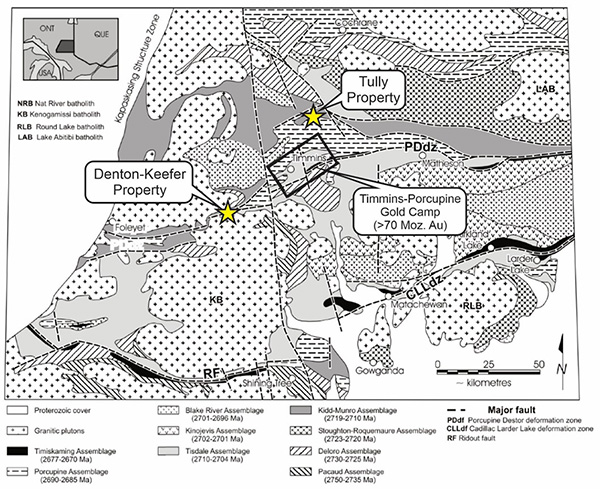 Crustal shortening resulted in burial and preservation of the Timiskaming assemblage as structural panels in the footwall of early thrust faults, which were then reactivated during later strike slip deformation. In the southern portion of the Abitibi greenstone belt, the Porcupine-Destor and Larder Lake-Cadillac faults are the principal examples of these long-lived, crustal-scale structures. The faults are subvertical, with widths ranging from tens to hundreds of metres, and are marked by intense brittle-ductile deformation and complex movement histories.

World-class orogenic gold deposits in the southern Abitibi greenstone belt, with a total gold endowment of more than 200 million ounces, are spatially and genetically associated with these faults, and second- or third-order structures that splay off these faults. Larger deposits are spatially associated with fault-bounded panels of the Timiskaming assemblage – a spatial proximity that is one of the defining characteristics of orogenic gold deposits in the Abitibi greenstone belt and a key empirical guide for exploration.

The Tully property is located in the north-central portion of the Timmins district. The property includes a 2.7 kilometre segment of the structural zone that separates mafic-ultramafic volcanic rocks of the Kidd-Munro assemblage (2.72–2.71 Ga) on the north from sedimentary rocks of the Porcupine assemblage (2.69 Ga) on the south. This structural zone is interpreted as a major early thrust, referred to as the Pipestone Fault, which splays off the Porcupine-Destor Fault and is thus highly prospective for gold mineralization.

The Tully property is underlain by a 500–1,500 metres thick panel of mafic–ultramafic rocks, likely representing basalt–komatiite flows of the Kidd-Munro assemblage, bounded on both sides by greywacke-mudstone turbidites, likely belonging to the Porcupine assemblage. The contacts of this panel are interpreted to represent thrust faults, along which these assemblages were imbricated during the early structural evolution of the Abitibi greenstone belt. Bedrock on the property is completely covered by a thick blanket of glacial drift; thus, the geology is entirely derived from drillhole and geophysical data. 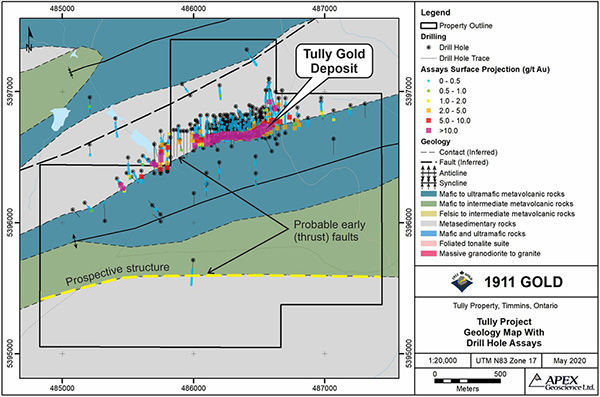 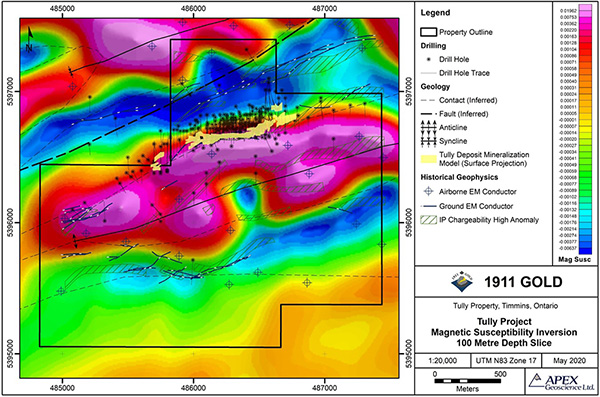 The north central portion of the Tully property includes the Tully (Timmins North) gold deposit, hosted by a layered schistose mafic unit – typically logged as ‘mafic tuff’ – along the north contact of the ultramafic panel. This host unit ranges up to 60 metres in thickness (typically 30 metres) and has been traced by drilling for over 1,600 metres along strike and up to 700 metres down-dip. It has a general strike of az. 250 and dips steeply north.

The Tully deposit consists of an array of shallowly inclined quartz-carbonate veins stacked ‘ladder-style’ within the mafic host unit and constrained by its hangingwall and footwall contacts. The higher-grade core of the deposit extends over 600 metres along strike and 400 metres down dip, and plunges moderately toward the east-northeast.

The drillhole database for the property contains 391 drillholes. More than 300 drillholes were completed in several drilling campaigns between 1969 and 2014 to delineate the Tully deposit, including 219 drillholes (totaling 66,468 metres) completed by SGX Resources Inc. between 2010 and 2014. The most recent published resource estimate for the deposit was produced in 2010, thus predating the SGX drilling. The prospective southern portion and contact of the mafic–ultramafic panel has been tested only at reconnaissance scale.

The Denton-Keefer property is located in the southwest portion of the Timmins district. The property covers a section of volcanic and sedimentary rocks of the Abitibi greenstone belt, tightly bound by granodiorite on the north and tonalite on the south. The southern portion of the property includes a 6 kilometre segment of the Porcupine-Destor Fault, which in this location includes a panel of sedimentary rocks, including iron formation, possibly representing the Timiskaming assemblage. Along the eastern boundary of the property, the Porcupine-Destor Fault is offset 3 kilometres northward by a late fault.

The majority of the property is underlain by volcanic rocks of the Tisdale assemblage, including intermediate to felsic flows and fragmental rocks with minor tholeiitic basalt and komatiite flows, siliceous sedimentary rocks, and gabbro–diorite intrusions. Younger intrusive rocks include lamprophyre, syenite and felsic porphyry dikes, the latter locally containing base-metal (Cu-Mo) mineralization. Map patterns within the Tisdale assemblage are interpreted to define a map-scale syncline, the axial trace of which trends toward the west-southwest through the central portion of the property, cut by diabase dikes of the Paleoproterozoic Matachewan swarm. 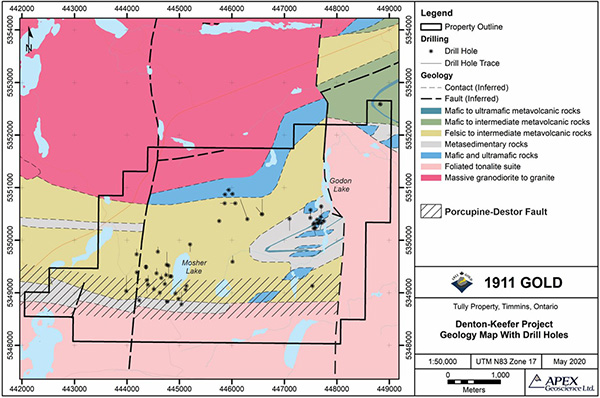 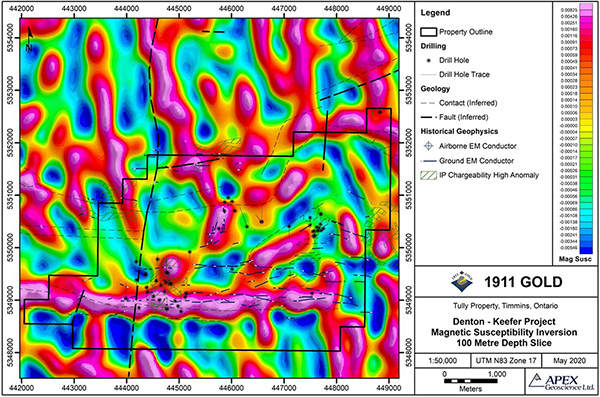 Owing to generally poor bedrock exposure on the property, only limited prospecting has taken place. Historical gold occurrences consist of quartz-carbonate veins and localized zones of sulphidation associated with brittle-ductile shears in the volcanic and sedimentary rocks of the Tisdale assemblage. A number of ground and airborne magnetic and electromagnetic surveys have been completed, as well as localized stripping, trenching, IP surveying and diamond drilling.

The drillhole database for Denton-Keefer includes 56 diamond drillholes, totaling 9,975 metres, which were completed in several campaigns between 1947 and 2010. The majority of this (36 drillholes, totaling 8,460 metres) was completed more recently (1998–2010), mostly near historical gold showings near Mosher Lake and Godon Lake, located in the southwest and northeast portions of the property, respectively. Grab samples from these showings have returned assay results up to 14.93 g/t gold, although drilling to date has generally returned sporadic low gold values.

The overall geological setting appears highly conducive to focusing of hydrothermal fluid-flow along the Porcupine-Destor Fault and through the narrow band of favourable Tisdale assemblage volcanic rocks; hence, the property is considered to have excellent potential for orogenic gold deposits.